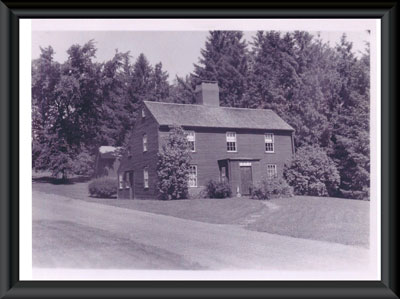 Thomas 1 Macy (1608 - 1682) was born in Chilmark, Wiltshire, England. Thomas Macy was among the first settlers of Salisbury and Amesbury, MA. In 1654, he sold the house (build about 1649) and property to Anthony Colby. In the fall of 1659, he and his family left Amesbury and became the first European settler on the island of Nantucket.

Anthony 1 Colby (1605 – 1661) was born in Horbling, Lincolnshire, England and came to America in 1630 on the Winthrop Fleet. Anthony Colby was one of the first settlers of Salisbury, MA and the new town of Amesbury. He purchased the house and property from Thomas Macy in the year 1654. Nine generations of Colbys lived in this home.

Susanna 1 Colby Whitridge (1610 – 1689) was the widow of Anthony Colby. After Anthony’s death, she married William Whitridge. He died in 1668. Susanna lived in the Macy-Colby house during the term of her widowhood.

Samuel 2 Colby (c.1638 – 1716), the second son of Anthony 1 and Susanna Colby, was the innkeeper of Amesbury’s Colby Tavern. He married Elizabeth Sargent about 1667. He purchased the house and land from his mother in 1682, to provide for her during her widowhood.

Samuel 3 Colby II (1671 – 1746) was the oldest son of Samuel 2 and Elizabeth (Sargent) Colby. He was a Yeoman. He inherited the former Macy land and other property from his father in 1716. He sold the north part of the former Macy land to John Bartlett in 1729, and additional land in 1731.

Obadiah 4 Colby (1706 – 1749) was the seventh child of Samuel 3 and Dorothy (Ambrose) Colby. He was a blacksmith. After his marriage to Bostonian Elizabeth (Gee) Colby in 1728, they resided in Boston. In 1744, they returned to Amesbury, and Obadiah purchased the south part of the former Macy land from his father Samuel 3. It is believed that Obadiah and Elizabeth Colby extensively modified the original homestead to its present structure.

Obadiah 5 Colby [Deacon](1731 – 1814) was also a blacksmith. He was the oldest son of Obadiah 4 and Elizabeth (Gee) Colby. He inherited his father’s house and land when he came of age. He purchased additional land west of the homestead from the heirs of Ichabod Colby.

Obadiah 6 Colby (1763 – 1832) was a blacksmith, like his father and grandfather before him. He was the third child of Obadiah5 and Mary (Merrill) Colby. He received the north part of his father’s land in 1816, which did not include the ‘Macy-Colby House’ property.

Hezekiah 6 Colby (1770 – 1844) was a Schoolmaster and was the sixth child of Obadiah 5 and Mary Colby. He received the south part of his father’s land with the house in 1816. He never married and lived in the house until his death in 1844. He left the house and property to his brother Captain William 6 Colby.

William 6 Colby [Captain](1775 – 1850) was a Mariner and the younger brother of Obadiah 6 and Hezekiah 6. He received the house and land from his brother Hezekiah’s estate in 1845, which he sold to his son, Obadiah that same year.

William 8 Colby (1851 – 1909) was a Trimmer. He was the second son of Obadiah and Mary Ann (Patten) Colby. He received his father’s house in 1885, where he lived until 1899. In that year, he sold land west of the house to the Bartlett Cemetery Association, and sold the house to his uncle Moses L. Colby 7.

Moses 7 L. Colby (1820 – 1901) had an adventurous youth. In 1849 Moses Colby headed for California in search of gold. After his returned to Amesbury, he remained a bachelor, and lived in the old Colby house with his brother Obadiah 7 and his nephews. In 1899, he purchased the house from his nephew William 8, and then deeded it to the Bartlett Cemetery Association, to be kept as a memorial of the Colby and Macy families and to the people of Amesbury, Massachusetts.